Overview of the WASABI architecture

In this article I will give an overview of the WASABI architecture, which I developed during my time as doctoral student (somehow similar to PhD student) at University of Bielefeld, Germany, from 2003 until 2008. As explained in my thesis , it serves the virtual human MAX as its affect simulation component, in order to make the virtual human more believable.

When in 2002 I had passed the last oral exam for my diploma in Computer Science (Naturwissenschaftliche Informatik) I had to decide for a topic for my diploma thesis. Fortunately, I had been involved in the development of the virutal human MAX as a student already, and when Prof. Ipke Wachsmuth met me in town one day, he (rather spontaneously) suggested that I might "take care of MAX's emotions" somehow. "Emotions? Well, what a nice idea!", I thought. And I said yes..

In retrospect, I had been quite naïve, because I had learned absolutely nothing about such a psychological/philosophical topic during the previous five years of study. Accordingly, a week later I found myself at the Thalia bookshop and remembered that I should check for some introduction to emotion theories. (Stupid enough I didn't first check the university's library..) There I found and bought "Einführung in die Emotionspsychologie, Band 1", which by now is rather outdated, though. Perhaps because this first volume concentrades on the older theories, I had been seduced to develop a computational emotion model that is less cognitive in its underpinnings than most of the others at the time. I skipped, however, the second volume, because it deals with emotion theories based on evolutionary psychology, whereas the third volume gets to discussing cognitive emotion theories.

Of course, I also found a number of existing computational models of emotions as mentioned in my diploma thesis. Thus, I started wondering what I could possibly contribute, but this demotivating feeling vanished quickly when I woke up one morning in autumn 2002. In that moment I realized that any emotional state in any given moment might heavily depent on the personal short-term history, even when you just woke up before. The type of dream and the remaining feeling of tension and/or sleepiness might result in a certain positive or negative predisposition to experience emotions. This is often summarized as the diffuse background state, called "mood", and for the sake of scientific success I also labeled it that way in my architecture. But when looking at other computational models of emotions, e.g. Patrick Gebhard's ALMA, "mood" is understood in a broader sense, I assume, which is closer to "personality." Anyway, this in mind on that particular morning I knew where to start from. Only later I found that Cynthia Breazeal's work on Kismet employs a similar concept, but not the same. This encouraged me to stick to the plan..

I decided to start simple with only distinguishing emotional valence from mood. Three simple mechanisms came to my mind:

These mechanisms have been realized in the emotion dynamics part of the architecture as it is described in my diploma thesis.

Obviously, however, there is much more to emotions than two mutually influencing valences. Thus, I needed to find a way to derive some "full-blown emotions" from these two values and was happy when I found the Pleasure-Arousal-Dominance space of Mehrabian. 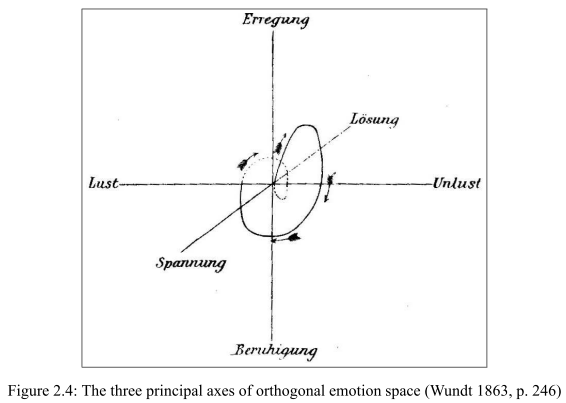 The German philosopher Wilhelm Wundt proposed in 1863 to think of emotional experience as consisting of three orthogonal components, namely pleasure, excitement, and tension. Any emotional experience can then be characterized by a contiuous progression of a single point in that 3D space; see picture to the left.

Interestingly, this idea had become less prominent in the beginning of the 20th century with the rise of behaviorism in psychology, perhaps, because Wundt did not  supply any empirical evidence. Computer scientists interested in natural phenomena (making them similar to the so-called cognitive scientists) face a very similar criticism ourdays, when just "programming stuff" without testing the result empirically.

Only after "empirical evidence" became available that told psychologists of the validity of assuming three underlying, partly independent dimensions of emotions, namely indirectly provided by Osgood, Suci & Tannenbaum (1957) in "The Measurement of Meaning", a number of followers started to think in that direction again. To my surprise, however, I could not find any reference to Wundt's ideas in the writings of Russel & Mehrabian, who provide "Evidence for a three-factor theory of emotions" in 1977. That publication introduced the by now famous Pleasure-Arousal-Dominance space, or PAD space in short.