The three tabs of the main window

The probably most important tab, the Emotion / Mood tab, is split into a left and a right part.

Here all Parameters of WASABI's emotion dynamics can be checked and adjusted, if needed. As described in my diploma thesis (pp. 64ff), non-zero values of emotion and mood are driven back to zero by means of two independent forces Fx and Fy that are calculated according to the following equations:

with t being the time, m the mass of the reference point, and d the spring constant for x and y, respectively.

The parameters in the Emotion / Mood tab correspond to these equations in the following way:

Force in x (emo): The spring constant dx of the Emotion axis x.
Force in x (mood): The spring constant dy of the Mood axis y.
Slope (emo -> mood): The slope affecting the mood in relation to the actual value of emotion. The higher this value, the quicker the mood changes when positive or negative emotional valence is present.
Mass (of ref. point): The mass m of the simulated reference point for the selected Attendee.
Update rate (Hz): The internal update rate in times per second (or Hertz). The frequency with which network messages are being send is independent of this value.

This part is entitled Test controls, because the buttons and sliders let you test the emotion dynamics. In addition, by marking the check box XYZ in 3D you can change from PAD space to XYZ space (emotion, mood, boredom) to be presented in the PADWindow, as detailed in the section above.

By pressing one of the two impulse buttons a positive or negative impulse of value 50 is sent into the emotion dynamics. Pressing the RESET button resets both the emotion (X) and mood (Y) value as well as (unfortunately) also the dominance (D) value to zero. As described in my thesis, the dominance value is independent of the emotion dynamics, i.e. it is not calculated based on the x, y, and z values. Therefore, it can be changed simply by using the rightmost slider labeled D.

Attention: When moving any of the three sliders P, A, or D, in the Override PAD section, the simulation is automatically stopped, as indicated by the unchecked Run check box in the main window's upper right corner! You need to check this box again to continue the internal simulation. 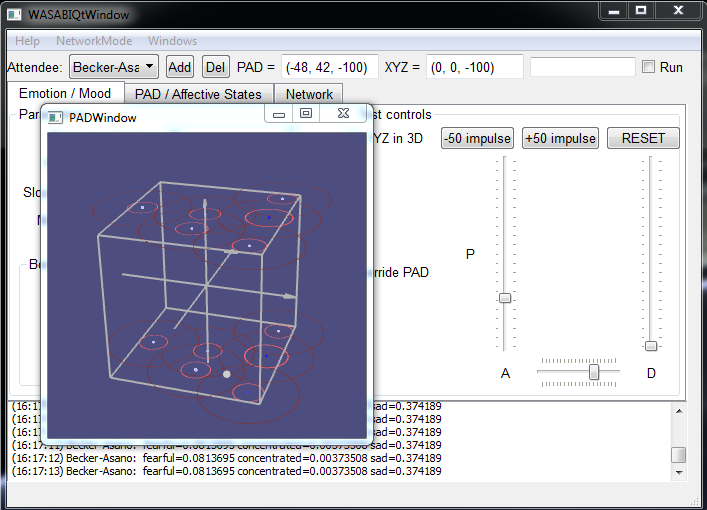 These sliders let you try out different PAD vectors and how they change the emotions that are elicited together with their changing intensities. In the example presented in Figure 8 the sliders are used to temporarily set the vector to PAD = (-48, 42, -100) resulting in three emotions with positive intensities (see debug output at the bottom). After checking Run again, however, only the dominance value will stay at -100, but the pleasure and arousal values will be calculated according to the emotion dynamics, which in this example results in: 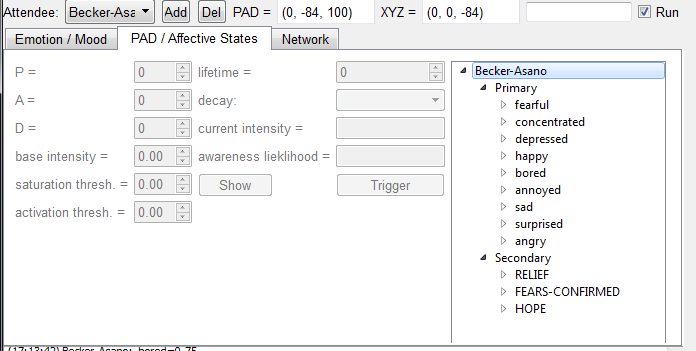 This tab contains list of all primary and secondary emotions that were loaded and instantiated from the configuration files, see Figure 10. The tree view to the right of this tab can be used to browse through and select one of the emotions. As long as no emotion is selected by means of a double click or by highlighting it and pressing the return key, the left part remains inactive (i.e. grayed out).