WASABI manual - The GUI of WASABI

The GUI of WASABI

The graphical user interface of WASABI consists of the three windows:

The latter two are rather non-interactive and simply present the emotion dynamics in a three-dimensional (PADWindow based on OpenGL) and a timeline manner (WASABIGuiQt based on qwt; still under construction). The WASABIQtWindow is the main window, from where you can turn the other two windows on and off using the Windows drop-down menu at the top. (I am sorry m(_ _)m for the strange naming of the windows.) 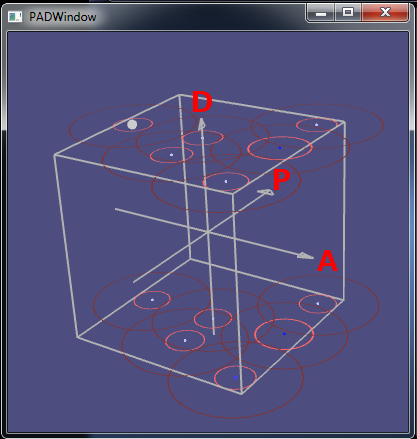 The program starts with the PAD space presented in a top-down view, see Chapter "Starting WASABI". Thus, in order to turn the cube so that it matches the one in Figure 2, press and hold the right mouse button and move a bit up and to the right.

Now, the vertical axis represents the Dominance axis (D), which features the smallest arrowhead. The horizontal axis with the long and thin arrowhead indicates the Arousal axis (A). Finally, the axis to the back of the screen with the wide but short arrowhead is the Pleasure axis (P).

The two differently sized circles around the white and blue dots indicate the activation and saturation thresholds of each primary emotion. In the example configuration presented in Figure 2 above you can tell that some primary emotion (i.e. surprised) is located at PAD (10, 80, +/-100) with a base intensity of 0.0, because its dot is blue and not white. The diameter of its lighter red, inner circle is also bigger than that of all other emotions meaning that its saturation threshold must be set to a bigger value that those of the other primary emotions. The activation threshold of this emotion, however, seems to be the same as that for all other emotions, because the dark red, outer circle has the same diameter for all of them.

Notably, the PAD space presented in Figure contains two primary emotions less than the one shown in the Figure 1 (Chapter "Starting WASABI"). In Figure 1, the primary emotion happy is represented four times in PAD space, but in Figure 2 the two locations PAD (50, 0, +/-100) are omitted. As you will see later, these changes can be achieved easily by editing the configuration files. 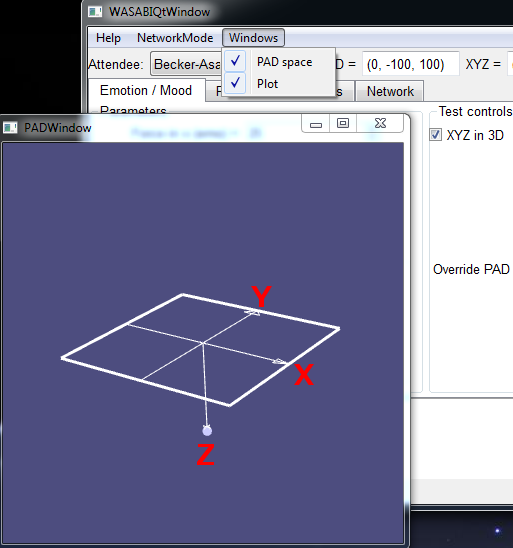 In the WASABIQtWindow under the Emotion / Mood tab you will find a check-box labeled XYZ in 3D (see Figure 3). After marking it the PADWindow will no longer present the PAD space but the dynamic space, which consists of Emotion (X), Mood (Y), and Boredom (Z). Looking at this space might be helpful when tuning the simulation parameters of the dynamics simulation explained below. Of course, you can turn the 3D view in the same way as described above.

Finally, you may safely close the PADWindow without terminating the simulation. If later you'd like to check the PAD space, you can use the drop-down menu of the WASABIQtWindow to show the PADWindow again.

Similarly, you can show and hide the Plot window entitled WASABIGuiQt.